Forty-year-old Kauila Haumea of Hilo has intense, expressive brown eyes that look deep into you. And he has a beautiful singing voice – a gift, he says, from his father Solomon Haumea, who used to drive a tour bus, and play guitar and ‘ukulele for his passengers.

Kauila also chants, and sometimes when he sings or chants, people are moved to tears.

But mostly, his heart is into healing. It’s about giving back to the community as much as he can, he says. “I want to help to heal the world a little bit at a time.” 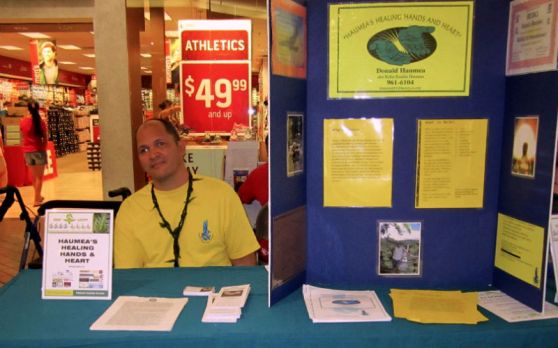 “When I’m laying hands on someone,” he says, “it’s not only my hands on the person. There are multiple hands at work. My spiritual guides are helping me, and all our healing energy is being combined.”

And, he says, that healing energy doesn’t only benefit the person he’s working on. It also comes back to him.

That’s significant because Kauila has some physical challenges, stemming from a genetic central nervous system disorder that causes him to have problems with his eyesight, balance and gait.

It also causes some communication problems, specifically a speech delay. A couple years ago, he got an electronic communication device called a Vantage Lite. His is a black box sheathed in a worn, black leather case with a grid that lies atop the screen, which makes it easy for him to touch a specific letter. When he does, that letter is voiced. This acts as a prompt and helps him vocalize a word he’s having trouble with.

The device helps him communicate and empowers him to be highly involved in the community around him. Kauila is a member of the local Lion’s Club and of the East Hawai‘i Developmental Disabilities Committee. He is a board member of a local disability rights group, and attends meetings of the Mayor’s Committee on People with Disabilities.

“He goes in order to stay informed with what’s happening in the community,” says Gail Yoshishige, who describes Kauila as “very motivated and self-directed.” She is a Full Life Hawaii direct support worker (DSW) who helps Kauila during the week. Her assistance means he’s able to live in his own apartment; she helps with bill paying, cleaning, shopping and driving him to meetings and the like. Other DSWs help on weekends.

Gail also helps him get to his healing appointments, meetings and other gatherings. Kauila was the first healing arts practitioner to participate at Hilo’s Abled Hawaii Artists (AHA) festival. The annual arts festival features and celebrates individual abilities in the arts, including people both with and without disabilities. The volunteer-run festival has visual artists, performers, entertainers, and tables from organizations that provide services. (The seventh annual AHA festival will be held at Prince Kuhio Plaza in Hilo on Saturday, July 19, 2014. Full Life Hawaii is the festival’s primary and fiscal sponsor.)

Mar Ortaleza, who is Full Life Hawaii’s employment services coordinator, says Kauila has participated in the AHA festival since 2006. Says Mar, “His initial participation is what inspired me to begin organizing other healing arts practitioners to share their types of healing modalities with the public.”

Last year, Kauila also participated in the two-day Pacific Rim International Conference on Disability and Diversity at Honolulu’s Hawai‘i Convention Center. Mar organized a healing arts area at the conference, and Kauila was the only healer from the Big Island. His massage sessions were booked solid.

Two women who experienced Kauila’s massages once told him he has “Pele’s hands.” 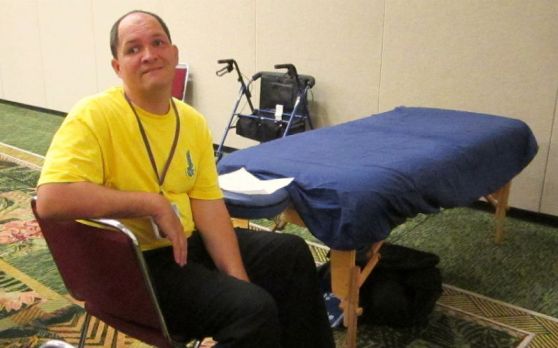 Mar says that Kauila’s massage, which he has studied formally, includes the Hawaiian style of massage called lomilomi. “And he’s also a reiki practitioner,” says Mar, “so he incorporates a lot of healing energy work in his practice. He also does oli; he chants when he feels like he is called to during his sessions.”

When Kauila does his oli, or Hawaiian chants, Mar says, it’s as though he doesn’t have a speech problem at all. “I think of it as his left brain being the speech part of his brain,” he says, “and that’s the part that is affected. But when you sing, it’s from your right brain, your creative side.”

Kauila explains it by saying that music relaxes his body, and that makes the words come easily.

He sometimes sings at church or with a friend at Hilo Coffee Mill. For 21 years now, he has rung the Salvation Army bell at Christmas, sometimes singing Christmas carols there outside KTA Pu‘ainako. His favorite is “Silent Night,” which he sings in both English and Hawaiian.

Kauila sometimes does Hawaiian blessings. Together, he and Mar blessed the Full Life Hawaii office in Hilo, and they have collaborated on other blessings as well.

“He’s amazing,” says Mar. “It’s like chicken skin. He has the voice of his ancestors when he olis.”

“We are thinking about branching out and doing a healing arts festival and calling it Haumea Healing Arts,” he says. “I suggested we call it by his name because Haumea is a very, very significant name in Hawaiian culture. Haumea is the earth goddess.”

He talks about how important healing is to Kauila. “I think it’s his passion and his life journey,” he says. “I think he said it, when he said that it heals both that person and himself. In a way, we’re all here to help each other heal. We’re healing each other, and healing ourselves, and helping ourselves to feel more complete.”

Mar says he really admires Kauila for being a great observer and having such a strong presence. “Despite an obvious obstacle, he has a strong presence because of who he is inside,” he says.

Mar stops and thinks a minute. He says, “I just look forward to him finding more ways to heal.”

To heal others? Or to heal himself?

Mar doesn’t hesitate. “I mean that both ways,” he says.