Louie Perry used to look at photos of Greece and wish he could see the place where the Olympic games originated, but he never thought it would actually happen. The 30-year-old Puna resident is a champion runner despite some serious health problems – a severe asthma attack at age 2 left him with brain damage and mild mental challenges, and he continues to deal with chronic and severe asthma.

But not only did the charismatic Pāhoa High School graduate visit Greece two years ago, he also won three gold medals there at the World Special Olympics, an event that drew 7,000 athletes from nearly 180 nations.

Louie has been a client at Full Life Hawaii for about four years and Full Life’s Mar Ortaleza has worked with him the whole time.

Mar says when they learned Louie was chosen to go to Greece, they couldn’t believe it.

“We talked about it and he was elated,” says Mar. “Me, too. It was the first time he’d gone out of the country, and he had a great time. He enjoyed the food and he said the women were beautiful.”

Louie says Greece was “a whole different world,” and that he liked it even more than he expected. Two years later, he is still marveling at all the ancient ruins. “And they’re still using them, as their markets!”

He says that the Special Olympics was challenging. It was very hot where they trained and he was surprised, too, by the crowds. “Choke people!” he says. “All the seats were taken, it was packed, and you’re like, ‘Wow! There are so many humans!’”

He ran in three different individual events, and won the gold medal in each. He also participated in a relay event, where his team took the silver.

Those were pretty amazing accomplishments for someone with asthma so severe that doctors say he shouldn’t be able to run.

“There’s people worse than me, but I do have pretty bad asthma,” he says. “It’s hard to have asthma and run. But I think I was born with a strong heart and that makes me able to run.” 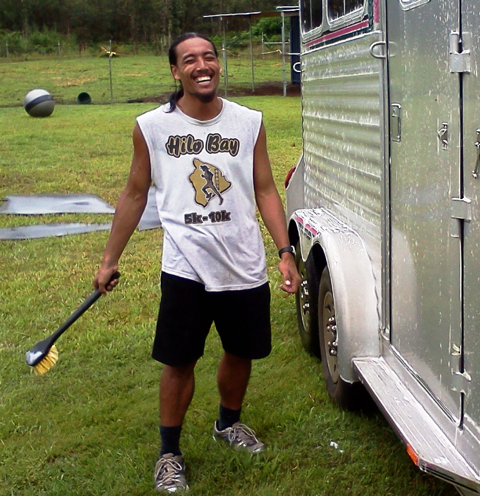 He does get sick more easily than most, and the Big Island’s vog is a real problem. “I take medicine and use a machine every night,” he says. “And when the vog comes, I get super sick and have an asthma attack.” Mar says Louie frequently ends up at the emergency room.

But nothing slows him down for long. Whereas most Full Life Hawaii clients have just one direct support worker (DSW), Mar says that Louie is “such a dynamic person, it requires a whole team to assist him.”

Three afternoons a week, one DSW takes him to Kamehameha Schools, where Louie is a volunteer assistant coach for the boys’ cross-country team. “I run with the faster guys, and then when I take it easy, I go with the slower guys.”

After practice, the same DSW takes him to Ninjitsu practice, where they both participate. Louie says, with a smile, that the martial art teaches them how to be ninjas.

“We’re still on the basics,” he says. “Rolling. Basic steps. It’s the best exercise ever, and we have fun.”

“One of Louie’s big dreams was to elevate his hobby of taking underwater photos to a micro-enterprise,” he explains.

He says that Louie is able to get marine life photos that are challenging for some photographers.

“Spending time with him underwater, I realized that he is in touch with nature,” says Mar. “The fish don’t swim away from him; they just hang out.”

“I assisted him in creating a very marketable portfolio, getting his general excise license, creating a business card, refining the quality of his art and getting some of it matted and framed.” Louie’s photos range from $1 postcards to $80 to $100 framed prints, and they sell.

“His photography is going to outlast his body and his ability to run,” explains Mar. “I’m helping him prepare for his old age.”

Inspired by working with Louie, seven years ago Mar established the annual art festival called Abled Hawaii Artists. It’s held each July at Hilo’s Prince Kūhiō Plaza. “The intent is to allow artists with disabilities to show and sell artwork,” he says, “and also to have community inclusion. This year, we also had about 10 healing practitioners who were sharing their massage, reiki or energy work with the public for free.”

Margie is another Full Life DSW who helps Louie regularly. Louie thinks of her as “the horse girl,” because she likes horses and teaches him about them. More frequently, though, she helps him find jobs, drives him to the work site and sometimes works right alongside him.

Louie says he learns different things from each of his Full Life DSWs. “And they’re friends,” he says. “Nice friends. We get to go places and it makes me smart. If I didn’t have them, I’d still be managing, and getting places, but it would be harder. I’d be walking, getting to the bus. They help me go different places and learn different things.”

Speaking of community, he says that when Louie got back to Hilo from Greece, a crowd met his flight.

“It was surreal,” says Mar. “Louie was kind of a celebrity. People were asking him questions and taking pictures. The mayor met him at the airport with a proclamation declaring ‘On this day in the County of Hawai‘i it is Louie Perry Day.’ Louie was blown away.”

How do you top that? What does Louie hope for his future? The quiet and good-natured man, with the easy smile and laugh, thinks a minute.

“I’m doing what I want to do,” he says. “Helping kids learn, and run. They’re younger, stronger, quicker than me, and they can be faster than I am. I’ve gotta teach the younger ones.”