Daylan Toribio wears long shorts, his green Garden Exchange T-shirt and Converse tennis shoes as he moves down the aisle of the Hilo garden supply store, “fronting and facing” the merchandise. The 21-year-old’s dark hair is close-cropped and his shy smile is genuine and friendly.

His life these days, says his mother Lorilynn Rapoza, is such a far cry from what she feared when he was diagnosed with developmental delays at around six months old and then with autism during preschool. Those unknowns, she says, were very scary.

Even five years ago, she says, she wouldn’t have dreamed her son could do all that he does now.

But, she says, since last December, when Daylan became a client of Full Life, a Hawai‘i Island nonprofit that supports and empowers people with developmental disabilities, he’s been making amazing progress.

Hilarie Enriques is Daylan’s primary Full Life direct support worker and she works with him in two areas: employment services and personal assistance.

It was Hilarie who helped Daylan get a volunteer position working at Garden Exchange, the family business her great-grandparents founded. 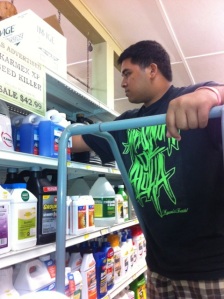 “For the first few months I was helping him acclimate, and building a bond between us,” she says. “After that, it was learning the duties at Garden Exchange, through modeling. I would do something, and then after I did it, he would do it. We went ahead and made analyses for each duty. I asked if he could describe what he does, like he’s the old employee and I’m the new one, and he had to explain how to do it to me. It built his confidence. With routine and consistency, he learned how to do it.”

At first she worked right alongside him, teaching him each task step-by-step, and then she backed off a bit so he could do it independently.

Daylan is also learning to grow seedlings, and he sells his plants at Garden Exchange’s nursery. Garden Exchange donates pots and soil, and Hilarie and Daylan set up a small nursery behind her family’s home where he grows hibiscus, marigolds, snapdragons, cabbage and more.

He got his first paycheck from selling plants last month. “I gave it to my mom so we could take it to the bank,” he says. “Now we’re planting Manoa lettuce and sweet red peppers.”

And nowadays, when a Garden Exchange customer asks what kind of fertilizer he or she needs, Daylan knows, because he actually uses them himself.

He and Hilarie work in the store four days a week for four hours a day. Daylan has learned how to do inventory and use the inventory log on the computer; water plants in the nursery; put flat flower boxes together upstairs with the giant, free-standing stapler; repack fertilizer into 5- and 10-pound bags and provide customer service.

The goal, she explains, was for Daylan to learn to do those tasks by himself. And he has.

So much so that he was just hired for a regular, paid position at Garden Exchange.

“He loves it,” says Hilarie. “And everybody loves him at Garden Exchange. He’s like family.”

Daylan’s mom says that he and Hilarie have a great rapport. “He responds to her directions well, and he’s able to communicate back to her very well,” she says. “He’s able to follow rules. She’s taught him things over there that I don’t know how to do! Measuring mixtures of fertilizers, analyzing what he just did; I’m taken by how much he gets it.”

Daylan also works with Hilarie a couple hours a day on independent living goals, such as personal accounting, telling time and exercising.

They also work on cooking. They decide what he wants to learn to make, and go to the supermarket together and find the ingredients. He’s learning how to pay for them. At home, he can now go into the kitchen and cook himself eggs, rice, gravy and other simple meals. He can bake a cake from a mix.

“I’ve seen a major turnaround,” says Hilarie. “In the beginning he had a difficult time even cracking an egg. We watched a couple YouTube videos, wrote down the ingredients, made an analysis. I would do one egg, model it and he would do another egg.” Now they are working together on creating a cookbook for him with healthy recipes.

On Saturdays, they go to Special Olympics, where the seasons rotate between sports (currently it’s basketball). His favorite sport there is softball, and when they are doing track and field, his favorite is the running long jump.

And then on Saturday afternoons they are on to the park, where Daylan participates in Amtgard, a live-action role-playing game where participants use foam-padded replicas of medieval weaponry.

Daylan’s mom says communicating used to be a real problem for Daylan, and that his communications skills have really improved.

“He’s started using words that I use,” she says. “For instance, now sometimes he comes and stands by me and watches what I’m doing. If I say, ‘Can I help you?’ he says, ‘Oh, no, I’m just curious.’ He uses words like ‘analyzing.’ He’s learning so much. I’ve seen such a big growth in him, and in his vocabulary.”

She says that he is up every morning these days, ready to go. When he gets home, he goes and finds her. “I ask, ‘How was your day?’ And it’s always good. He tells me what he’s going to do tomorrow…”

She says she is ecstatic at how happy he is and how well he is doing. “I’m thinking, as long as he has the right tools, encouragement and the right people making him feel important and that he can do things, I cannot ask for more. Seeing what he has already accomplished is great. I can only see him achieving more!”

And she feels he is definitely on the right path. “I can see Daylan reaching that goal of being independent, where he would be able to live on his own one day and maybe have a steady job. I’m very content. Very content.”

Daylan, too, is happy with how his life is going. He says his work with Hilarie has given him great opportunities.

Who is that? “A caring, kind and good person,” he says with a smile.